Terengganu are looking to put their hands on some silverware following a successful transfer window where Nafuzi Zain got what he wanted.

The closed season has seen TFC brought in big names to shore up the team for what will be an interesting campaign for them in the 2020 M-League season. Pint-sized midfielder Fair Nasir has returned to familiar territory while Dominique da Sylva and Babacar Diallo have come in from the Vietnamese and Finnish leagues respectively.

Experienced Super League campaigners in Stuart Wark, Faris Ramli and Nasir Basharuddin have also been brought in as head coach Nafuzi is given all the helping hand he need to push on from their seventh place finish in the league last season and quarterfinal appearances in both the cup competitions.

The Chief Minister of Terengganu who is also the president of the Terengganu Football Association, Datuk Seri Dr Ahmad Samsuri Mokhtar spoke at the launch of TFC’s brand new kits for the 2020 season that he is eyeing big things for the team in the coming season and he’s hoping for better fortunes under different environment for the first team. 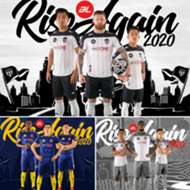 “Our target this season is to do better than last season. We put high targets for ourselves and that means competing for all the trophies that are available. With the right preparations led by Nafuzi Zain, I’m confident that the team can meet the target set.

For the new season, TFC has retained the black and white design for their home jersey while it’s blue for the away jersey and grey for their alternate jersey. TFC will open their Super League campaign against Perak on 29 February.