Samuel Eto’o discloses Lionel Messi is unlikely to leave Barcelona and is convinced the Argentine will extend his contract.

Since making his Blaugrana bow 15 years ago at the age of 17, Messi has won a club-record 34 trophies including four Champions League titles, 10 La Liga titles and six Copa del Reys.

The Argentina international is officially contracted to Barca until 2021 as he continues to accentuate his importance to Quique Setien’s squad even at 32 years of age.

He has extended his contract eight times since 2005 with his latest deal, signed in November 2017, making him the best-paid player in La Liga – worth a reported €580,000 a week.

His former Cameroonian teammate is not worried about the six-time Ballon d’Or winner’s future in Catalunya, as he stays optimistic the club’s prized asset will remain at Camp Nou beyond the expiration of his existing deal.

“He can extend his contract at Barcelona. He still has the legs to go with it,” Eto’o told Goal.

“I think he will finish his career at Barcelona and if he feels he can do it then he can do it.” 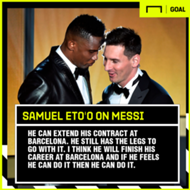 The forward was Barcelona’s hero after scoring a penalty in Saturday’s1-0 triumph over Real Sociedad at Camp Nou on Saturday.

So far, he has contributed 19 goals in 21 Spanish top-flight appearances this term as Setien’s team go neck to neck with Real Madrid for the league diadem.