With 12 gameweeks remaining, the Fantasy Premier League is hotting up as over six million players aim to finish the 2019-20 season on a high.

So is it Bruno Fernandes in, Mesut Ozil out? Kevin De Bruyne for Sadio Mane? Is now the time to sell Jamie Vardy? These are the dilemmas that face Fantasy Premier League managers every week – but we’re here to help.

From team selection advice to possible captain picks and the latest FPL stats – Goal gives you all the tools you need to turn those arrows green and climb your league tables.

If you don’t have the maximum available three Liverpool players in your squad by now then do something about it, immediately, even if it means using up your wildcard. The Reds are storming towards their first Premier League title in some 30 years and there shouldn’t be too much risk of squad rotation at the moment, even though they’re also juggling the Champions League and FA Cup.

Jurgen Klopp won’t want to lose any momentum and while the players have publicly played down the pursuit of records, there will no doubt be a burning desire to complete the league campaign without a single defeat and changes to the starting XI are therefore likely to be kept to a minimum.

A plum fixture against struggling West Ham awaits on Monday – six days after the Champions League defeat to Atletico Madrid – so Mohamed Salah (£12.8m) and Sadio Mane (£12.2m) should be well rested and are almost certain to start.

Trent Alexander-Arnold (£7.7m) and Andrew Robertson (£7m) continue to provide the best option in terms of defender picks and if you do have concerns over rotation, especially heading into March and April, then bring Alisson (£6.2m) in to be guaranteed those clean-sheet points.

Elsewhere, the injury to Heung-Min Son (£10m), that could see him miss the rest of the 2019-20 campaign, will come as a blow to Jose Mourinho and FPL managers alike, and many will be weighing up alternatives to the Tottenham forward heading into Gameweek 27 and beyond.

Anthony Martial (£7.9m) and Bruno Fernandes (£8.1m) remain decent options ahead of Manchester United‘s home meeting with Watford – the latter, introduced as a second-half substitute in Thursday’s 1-1 draw with Club Brugge, has obvious points potential given he has become the Red Devils’ primary free-kick and corner-kick taker.

Arsenal winger Nicolas Pepe (£9.1m) appears to be starting to find his feet in the Premier League and he appears a sensible selection, with Everton and West Ham at home to come in the Gunners’ next two games. Be mindful of the fact he won’t have a fixture in Gameweek 28, though, where many FPL managers will no doubt be reverting to their Free Hit chip.

Richarlison (£8.2m) is another that FPL bosses will be considering although Everton face Arsenal, Manchester United, Chelsea and Liverpool in their next four league fixtures, which is likely to deter many from bringing in the Brazilian.

Now may also be the time to invest in Sheffield United defenders with the Blades, who have the second best defensive record in the league, facing Brighton, Norwich City and Newcastle in their next three fixtures, albeit with a gap in Gameweek 28.

John Egan (£4.6m), George Baldock (£5.1m), Chris Basham (£4.5m), Jack O’Connell (£4.7m) and Enda Stevens (£5.1m) have all been mainstays in Chris Wilder’s starting XI over the course of the season and if you’ve hung onto John Lundstram (£5m) up until now it could be worth persevering, with his winning goal in the 2-1 over Bournemouth likely to earn him a recall.

Who is the best captain pick for Gameweek 27?

We say the same every Gameweek but it’s difficult to recommend going with anything other than a Liverpool player for your captain choice, Sadio Mane (£12.2m) or Mohamed Salah (£12.8m) the two usual suspects.

That’s not to say there wouldn’t be value in the more risky choice of Trent Alexander-Arnold (£7.7m) or Andy Robertson (£7m), with a clean sheet likely as the Reds come up against a West Ham side struggling towards the foot of the table. The full-back duo do, of course, also offering potential going forward as well.

If you’re looking for an alternative then Danny Ings (£7.1m) could well be your man – the Southampton striker has scored in his last two games in all competitions after a mini-drought of four without a goal was brought to an end, with Aston Villa next up at St Mary’s for Ralph Hasenhuttl’s side.

Fresh from his 17-point haul in Arsenal’s 4-0 demolition of Newcastle United last time out, Nicolas Pepe (£9.1m) is also a viable captain pick and is almost certain to start against Everton on Sunday having only been introduced as a 75th-minute sub in the Gunners’ 1-0 win over Olympiacos on Thursday. 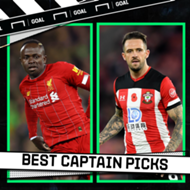 What was the highest-scoring team from Gameweek 26? 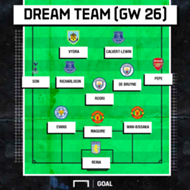 The team digest the latest results, look ahead to this weekend’s matches and there’s an in-depth chat about the merits of VAR following the latest controversial calls.