Following his move to the Georgian topflight side, the Super Eagles defender has lifted the lid on his reason for joining George Geguchadze’s side

Batumi were runners-up in the Georgian elite division last season and will feature in next term’s European club competition.

The Nigerian who had a brief spell with HNK Gorica was signed to beef up George Geguchadze’s squad for their outing.

Another challenge beckons, so help me God ⚽️🙏 pic.twitter.com/gUVFlTzjhD

In a chat with Goal, Oboabona expresses his delight with the move and is keen to prove his worth for the Angisa Base giants.

“First, I am glad to be a part of Dinamo Batumi family because they are a big club in Georgia,” he said.

“There were a few clubs that were interested in having me, but the opportunity to feature in the Europa League made this choice an easy one.

“I didn’t know a lot about Batunmi as a club on arrival, but now I can say that I am feeling more at home because of the welcoming environment.

“My manager [Geguchadze] has also been cooperative in helping me adapt quickly to life in this new environment.” 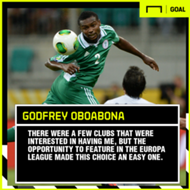 He added: “There are quality players in this team and my immediate focus is to prove my worth to Batunmi, not just with individual performance, but as a team.

“We hope to go far in the Europa League as well as compete for the Georgian league title.”

Dinamo Batumi continue their preparation for the new season with a friendly against Olimpik Donetsk on Thursday.