The beautiful game in Ekiti had been in a state of comatose; however, his election as governor has brought a glimmer of hope to the state football, thanks to his deliberate support of grassroots football – as well as the workings of football association boss, Bayo Lanlege.

For instance, the Land of Honour will be participating in the football event of the 2020 National Sports Festival – their maiden appearance since its creation in 1996.

Despite his inexorable support for the game, governor Fayemi discloses he will not rest on his oars until he sees a team from the state feature in Nigeria’s elite division.

“God has been good to Ekiti state under my watch, and we’re really moving to greater heights,” Fayemi told Goal.

“The state is developing; we are restoring the values – including our values in sports. We used to be a well-known sporting state, but things are not quite what we want it to be.

“This was the state that produced Olusoji Fasuba, Oluyemi Kayode, Tosin Oribamise and now, we are announcing to Nigerians that we are back and ready to take other states on. We would demonstrate that at Edo 2020 [National Sports Festival].” 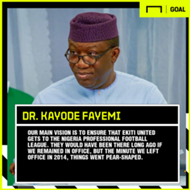 He added: “Right now, our main vision is to ensure Ekiti United gets to the Nigeria Professional Football League.

“They would have been there long ago if we remained in office, but the minute we left office in 2014, things went pear-shaped.

“But as soon as we got back, Ekiti United have been back. I’m confident that in next year’s [Nigeria Pro-league season], we would top the league and move to the [NPFL].”

Before the country’s second-tier was hit with an indefinite suspension, Ekiti United sit at the base of Group B1 log with three points after four matches.

Their last outing was a 1-0 defeat to Shooting Stars at the Lekan Salami Stadium, thanks to Chinedu Enuademu’s second-half strike.

Previous Leaders Of Nigeria’s Opposition Party, PDP, Protest At European Union, French Embassies In Abuja
Next Oduor explains why KCB’s loss to Kariobangi Sharks was a blessing in disguise