Luis Suarez: The Barcelona and Liverpool ‘assassin’ – adored by Lionel Messi and Steven Gerrard – who is so good Gerard Pique doesn’t care he bites

Luis Suarez is now enjoying a new chapter in his extraordinary career having joined Atletico Madrid and now he’s ready to play Chelsea in the Champions League  – live on talkSPORT.

The 34-year-old striker left Barcelona in the summer window as the club’s third top scoring player in its illustrious history and his exit was met with frustration – from Lionel Messi in particular.

He was supposed to join Juventus, but his move fell through due to passport issues.

His Atletico switch was in jeopardy at one point when Barcelona chairman Josep Maria Bartomeu intervened due to concerns over the Uruguayan joining a rival.

But after threatening to take his grievances to the media, he got the Catalan club to back down and let him join Atleti.

For most players, this would be high drama, but for Suarez, it was just a Wednesday.

And his link up with manager Diego Simeone in Madrid has been a match made in heaven.

Suarez has 16 goals and two assists in LaLiga, making him the joint-top scorer in the division alongside friend and former teammate Lionel Messi.

It’s form which certainly proves the Catalan giants were too hasty in selling him. 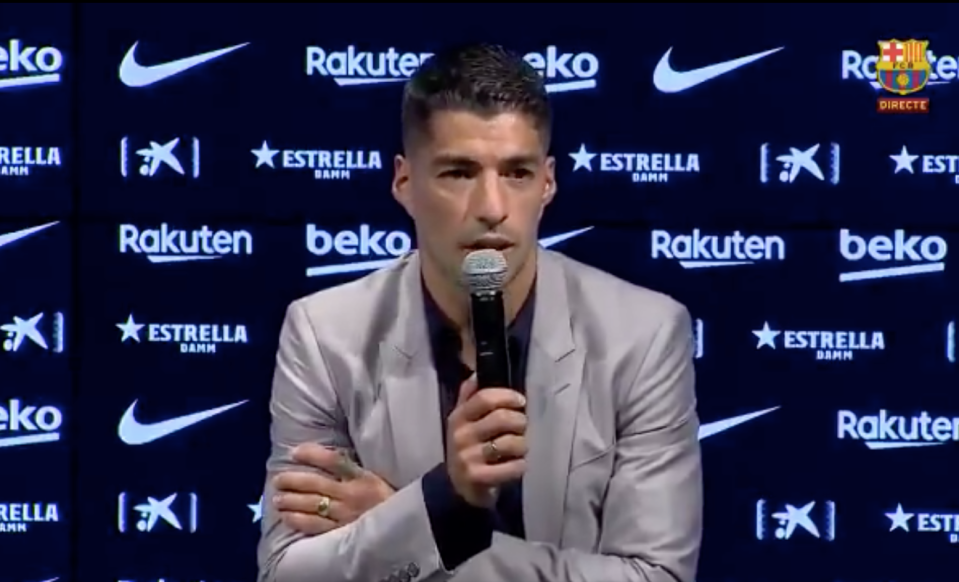 Luis Suarez said an emotional goodbye to Barcelona following an illustrious six seasonsThe striker’s glittering, trophy-laden career, though, will be remembered as much for scandal as it will for goals.

Having become one of the greatest strikers in world football at Liverpool and Barcelona, his mercurial talent has never been in question.

But too often, his behaviour on the pitch has grabbed unwanted headlines. You just can’t go around biting people, Luis.

Two high-profile incidents of biting, on Branislav Ivanovic and Giorgio Chiellini, plus accusations of racism against Patrice Evra have made Suarez one of the most disliked figures in world football over the years.

Let’s not forget his deliberate handball, and subsequent celebration, at the 2010 World Cup to deny everyone’s second team – Ghana – a place in the semi-finals.

Even Liverpool fans started booing him during their Champions League clash with Barcelona in 2019!

But while us fans may never warm to Suarez, his teammates and managers have loved and adored him over the years.

Suarez has been the perfect partner in crime for arguably the greatest player of all time down the years, and that hasn’t been lost on Messi.

The two South Americans are also close friends off the pitch, so Suarez can’t be all that bad.

The Ballon d’Or addict said: “He is the best out-and-out forward there is in the game today. He has so much to offer the team and it is a pleasure to play alongside him. We also have a very good relationship off the pitch and I am very happy to be sharing everything with him.”

From one iconic striker to another, Henry has compared Suarez to his former Barcelona teammate Samuel Eto’o.

For the very best players, like Suarez, Henry and Eto’o, it’s about more than just goals.

“Suarez has everything, he fights, great movement, he is the right age and obviously he scores goals,” said the Frenchman. “He gives something to the team, that especially at Barcelona is very important. It is the hard work that Samuel Eto’o used to do, not just goals.”

They don’t come much better than Xavi, who also compared Suarez to Eto’o due to his ‘bad mood’.

“He has goals in his blood,” said the legendary midfielder. “I have said that more will come. He will start scoring goals. He reminds me a bit, with his killer instinct to damage other teams, of Samuel Eto’o, that bad mood, that personality, that persistence.”

Suarez is so good that Gerard Pique doesn’t even care that he bites people!

He admitted: “I don’t care if he bites. I don’t care if he’s bitten before. He knows it’s not the correct way to behave but as a player he is in the top three or five strikers in the world so I am really happy to have him in my team.”

But none of his former teammates were better than Suarez.

He said: “I don’t think anyone ever looks forward to playing against Luis Suarez, he is a fantastic talent and a very dangerous player. He is a fantastic team mate, probably the best player I have played with.”

Bad behaviour aside, Suarez is a manager’s dream, with the work ethic to go alongside the magic.

So much so that former Barcelona boss Enrique described him as ‘indispensable’.

The former Barcelona and current Spain boss said: “Luis is a penalty area assassin, a killer, capable of resolving any situation that crops up in the area. If we also consider the pressure he puts on defenders by closing them down and the way he encourages the others, then he is indispensable.”

Previous Luis Suarez was sold by Barcelona against Lionel Messi’s wishes and could beat him to a title – another controversial chapter after biting, abusing, and cheating rivals
Next Jadon Sancho goes ‘full Steve McClaren’ with funny German accent as Man United transfer target adds to stats and explains goal celebration

Boris Johnson has offered to host every European Championship game in the UK this summer ...