This came days after the 32-year-old disclosed he does “not feel comfortable” playing amid the ongoing pandemic while calling on authorities in Turkey to cancel the rest of the season.

And Pascal, who is a close source to the ex-Nigeria captain backed the decision.

“Mikel values his life more than anything and like he said recently ‘there is more to life than football’. He has achieved and saved a lot, so, it will be silly if he loses all to coronavirus and people who don’t have an idea about his wealth would pounce on it,” Pascal told Goal.

“He knows what he wants and in my association with him over the years, he is someone who doesn’t compromise or prioritizes anything over his life. Not even under this deadly virus taking over the world.

“Some will not agree with him on this, but let me set the record straight that Mikel is neither playing for money nor fame, but strictly for fun and for the love of the beautiful game. So why will he expose himself to a danger that has killed a lot of people?” 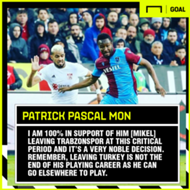 When quizzed if the decision was a wise one, since Huseyin Cimsir’s men currently lead the Turkish Super Lig and are on the verge of a seventh league diadem, Pascal replied: “My brother, titles are not won in the grave, only the living does that.

“At Chelsea, he won the Champions League and other bigger titles, so not winning the Turkish league title is not a big deal. He is not playing for fame, so you don’t expect him to risk his life.

“I am 100% in support of him leaving Trabzonspor at this critical period and it’s a very noble decision. Remember, leaving Turkey is not the end of his playing career as he can go elsewhere to play.

“I believe him and I trust his judgment and as a young man who has bigger things to accomplish after football, it is safety first.”

On what next for the 2013 Africa Cup of Nations winner, the 45-year-old who doubles as chairman of the Bauchi Football Association reveals the midfielder has not drawn the curtain on his illustrious career, thus, he will decide on his next move after the Covid-19 virus is contained.

He added: “As it stands, he has not announced his retirement yet, definitely, he is going elsewhere to play football.

“Once this coronavirus thing is over, I believe he will disclose to the world where his next club would be.”

Mikel joined the Medical Stadium giants as a free agent on a two-year deal last summer, at the end of his brief stint in the Championship with Middlesbrough.